Impossible though it seems, we have now been back from our Easter trip to the UK for over two weeks. Good intentions of writing up our visits to Scotland and Cornwall have been lost somewhere along the line, so what follows is a very brief attempt at a catch up and to thank all those who were so kind to us while we were away.

The visit started with a degree of stress because the installation of the new kitchen went to the wire with Manolis, Adonis, Alkis and Michalis all working here during the evening before our departure to get it finished. It meant that we spent the morning of the day we left hurriedly unpacking various boxes of kitchen utensils and shoving the contents into any available space, which included the oven! The result was that when we arrived back here, there was a job to be done before we could get round to actually using any of the new appliances! However, two weeks in and we have just about found where everything is and it is all brilliant and we are very pleased. It is however, just a kitchen so no need to get too excited when there is so much else going on in the world!

We arrived in Edinburgh very early at the beginning of April and took a taxi to Dalgety Bay in Fife where we stayed a few days with Sheila’s brother, catching up with Sheila’s extended family and approving of the progress made by the four great-nephews. 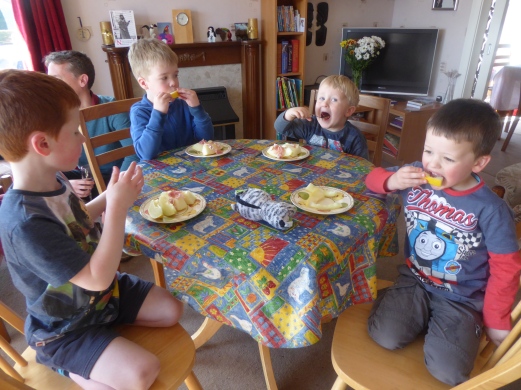 It also gave us a chance to recover from all the kitchen excitement and to note progress on the new Forth Bridge. 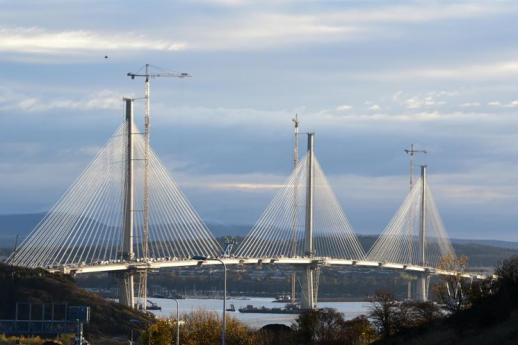 Then we moved on to Edinburgh where we stayed with Fiona in Juniper Green and later, Sally and Robert in Currie. It was great to catch up with their news and enjoy their company.

Then we hired a car and went to Kirkcudbright where we used to live, having taken in a visit to some elderly friends of Sheila’s Mum, who live in Glasgow. It has to be said the Kirkcudbright was not looking at its best – the weather having taken a turn for the worse but we enjoyed re-visiting the town and staying with Alasdair and Yvonne, Christine and Mike and Bev and David. Again, it was good to catch up and relax with kind friends. Probably the highlight for Sheila was visiting the tennis club and seeing a number of her old colleagues who made her very welcome and she was particularly pleased at how well the Club is now doing – a fitting tribute to her past endeavours.

We visited our flat (which is now on the market) and did a little cleaning in the hope of stimulating a sale – so far to no avail! We even found time to frequent a few old haunts. 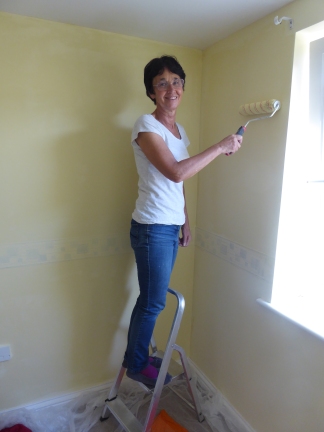 Then we flew to Cornwall where we stayed with Rose in our flat in Newquay and were blessed with some stunning Spring weather for the ten days we were there.

Sheila found time to do a little painting while I did a few odd jobs around the place. Rosie showed us the garden at the hotel where she now works full-time and treated us to a meal in the restaurant there.

It clearly is a good idea to be friends with the chef because we were given at least two extra courses and everyone was so kind and friendly because we were Rosie’s Mum and Dad, so clearly she is both popular and valued!

It was fun spending some time with her and we really enjoyed our stay. 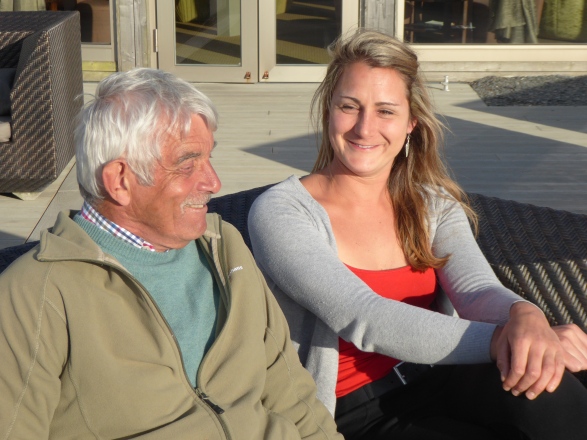 She also took us to see Caerhays Castle grounds, which as stunning, both as regards the floral display but also the setting. Sheila even managed a paddle!

While we were in Cornwall we visited Graham Hilder, late of Mochlos in Crete and one of Sheila’s tennis pals here. He provided a packed programme for us, including a visit to St Ives and a stage to screen performance of ‘Copelia’ from the Sydney Opera House. 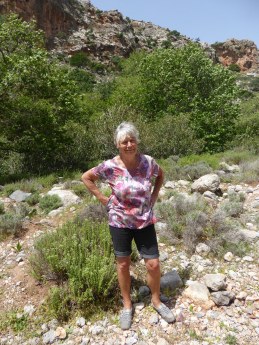 I also met up with my old school friend, Terry Larcombe who I had not seen for the best part of fifty years. It was great to see Joe (for such I have always known him), after all the years and to catch up on our lives and I look forward to seeing him again soon.

Then it was time to return to Crete where we found the house in good order and the flowers well-looked after by Maria, in our absence. Since returning, we have had Phil from Bracknell and Liz from the Lake District to stay and Jane from London has just arrived for a week’s walking with friends.

Judging by recent weather (it was 37.7 C the other day in the shade), they may be simply walking into the sea to cool off rather than walking in the hills but we shall see!

Since we have been back, we have also found time to see a tax accountant with a view to considering re-locating to Crete on a more permanent basis. There are some difficult decisions to be made in this respect – none more so than affordable health care but since our recent trip to the UK, we are increasingly of the view that this is something we need to consider seriously.

This is partly a result of the Brexit vote last year but also because each time we visit the UK, we find life in Britain is more and more depressing. Probably the film, ‘I, Daniel Blake’ sums up what I mean. While there are of course many and notable exceptions, the generality is that many people don’t seem to care for anyone beyond their immediate family. There seems to be a lack of generosity of spirit, little value put on teachers and health workers and a growing dislike of foreigners.

As I write this, the opinion polls are still pointing to a Tory win at the General Election, a result which I find personally disturbing because it is my generation which seems prepared to vote back a Party bank-rolled by hedge funds and banks, and which cares so little for all that I value in Britain.

The main reason however is more positive. We like living in Greece. We like the people and we approve of the way they value family and community. We feel happy here and whilst there are of course problems, we feel we can deal with them.

We are not sure we want to live in the kind of society on offer from Mrs May – hence the need to look at an alternative which suits us better, at least for as long as the Greeks will allow us to stay. More to follow on this, no doubt!