Whilst John and I read about  the reality and horror of Covid 19 throughout the world and we worry about our family and friends, life for us continues quietly here in Crete. We see no sign of the virus around here but we know the importance of obeying the rules and keeping safe.

Our life this autumn would have been a little different as we had planned to meet up with our Canadian friends, Cathy and Bruce and visit Northern Greece. And we would have had at least one of our children here over the summer. We might have tried a little island hopping if there had been time and certainly booked flights to go the UK in October/November. For a few days, we were tempted to get the ferry from Siteia and visit the island of Karpathos but decided that on many grounds that it was better to stay here.

It was a good decision because there have been many happy moments over the last 6 weeks. John and I celebrated our 37th wedding anniversary in Mochlos on September 12 with the usual, unbeatable ingredients of cocktails, 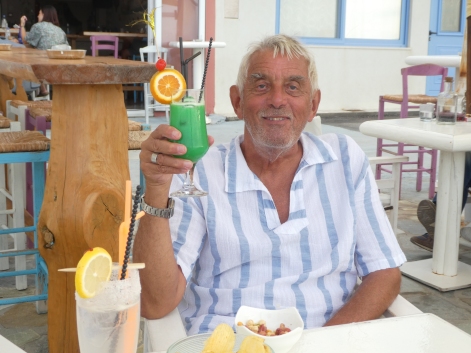 That day, we had returned from a five day trip. First, we spent two days at Mikali’s studios in Tsoutsouros,

which we had visited in June. Sadly, we did not see Maria, who was in Athens because her mother had died but her husband, daughter and son in law did a great job looking after us.

We decided to go on an excursion to the small village of Treis Ekklisies (Τρεις Εκκλησίες), which we had heard was very lovely. On the way there, we went on a route which involved a dirt road and a stop at Μουρνιά, a village in the mountains, to check with some friendly locals as to whether we should carry on or turn back. They assured him that our car was fit for purpose and it was. It led to one of these amazing, unbelievable,  twisty, steep and now covered with tarmac roads in Crete which take your breath away in terms of the engineering involved. 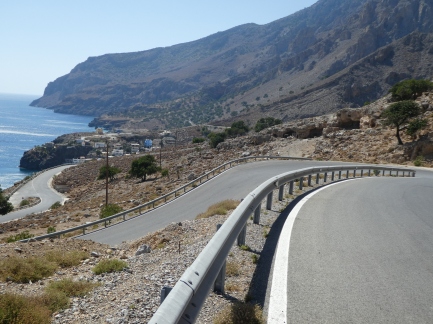 Treis Ekklisies was at the bottom of the hill in the most stunning location. 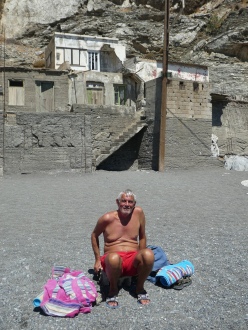 found one of the three churches,

and stuck to tarmac all the way back to Tsoutsouros,  I am used to seeing lots of small churches in Crete but on this journey we passed so many beautiful ones with no obvious signs of a village nearby. 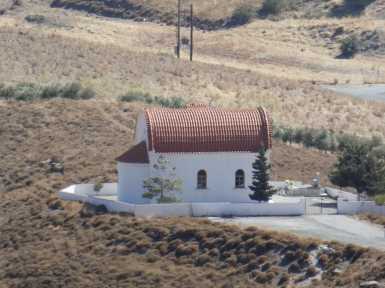 The next day, we arrived at a taverna called Agia Fotia,where we stayed for 3 nights.

It is situated right by the sea and is many kilometres from the main road.  When we arrived at lunchtime, we were surprised at how  busy it was, given its location . There was no big town around about but the reason soon became clear. The food was wonderful and it is in a very lovely location. In the evening, I chose red snapper, which was the dish of the day. It was so delicious and will remain in my memory for a long time. And the prawns and the chicken on the other two nights we were there, were also fantastic.

On one day, we drove to Preveli and went to the famous monument, dedicated to the brave Allied soldiers and the priests of the Cretan resistance in World War 2.

I had seen it before but you cannot help but be moved by it. We decided not to visit the beach, 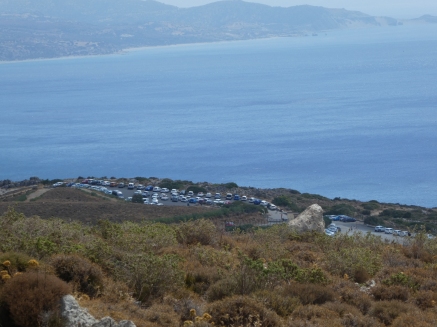 or the monastery. There were too many cars there for comfort and we drove on to Damnoni beach. In 1983, just before John and I were married, we had a two week holiday in Plakias. We arrived by bus, found ourselves a room and walked to Damoni beach, of which we have find memories. So 37 years later, We went to have a look at our old haunt and whilst it is still pretty

in my view the  sunbeds and terracing  spoil it a little bit (John thought rather a lot). When we arrived in Plakias, we found a cafe and then went back in time, looking for signs of Plakias in 1983. It has grown a lot!!!  We think our room from that time, might have been up there!

and we found a bus stop

but I think it was not where we arrived in 1983!  Eventually we just admired the beach!

The roads around Plakias and Preveli have improved a lot in the last 37 years and there were no worries now about dirt roads!

The next day we found another beach and enjoyed a morning there.

It was beautiful, empty and there were wonderful stones there. 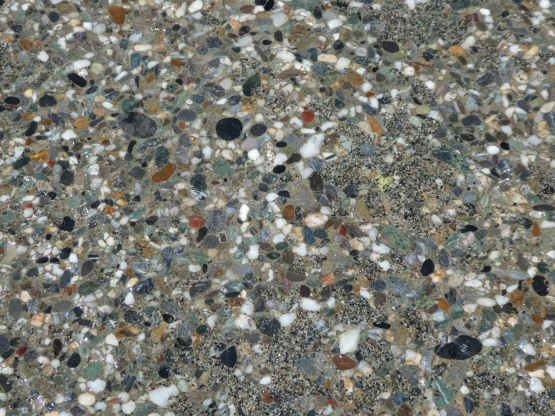 I wanted to take them all home!

We moved onto Triopetra for lunch, which is one of our favourite places in Crete and ate at the Taverna Apanemia and enjoyed meeting Stelios again and eating aubergine and feta cheese.

When we got back to our hotel, John found that he couldn’t close his car window. It was left like that overnight and we left early to get to Ierapetra so that a mechanic could look at it. On the way back, John realised that the two back windows wouldn’t work either. Finally, he asked me to get the manual out which is huge and we avoid having anything to do with. I read out basic instructions from the manual and it was sorted! We There was a button that I must have touched the day before which locks all the windows except the drivers. We were very relieved and happy but felt very stupid!!!

When we came back to Kavousi, we found that the water pump supplying the village had been damaged. It was 10 days before a new pump was installed. In the meantime, water was available from another source between 8 and 3 which was good but the evening shower was sorely missed. It is not until something is taken away, that you really appreciate its worth! Two days after the water in the village returned, it rained. It was the first rain for many months.

It only lasted a few hours but our neighbour, Maria, was very excited and the plants immediately looked happier!

At Christmas, I gave John a bird of paradise plant, without much expectation that it would flower. But for a few weeks there have been two stalks that did not look like they were going to be leaves. Everyday, for a week or two, I have been rushing out to check on these. Finally, it was clear that there were two flowers. One of them came out completely last Thursday (see the cover photo) and I was so excited. It is such an exotic flower and I am enjoying sitting outside admiring its beauty!!!

In the evenings as we ate outside in early September, we were lucky to see the moon rise over the mountain behind us and also to see the planets, Jupiter and Saturn (You can see Jupiter in the picture just!) . One time, our neighbour also provided a light show. 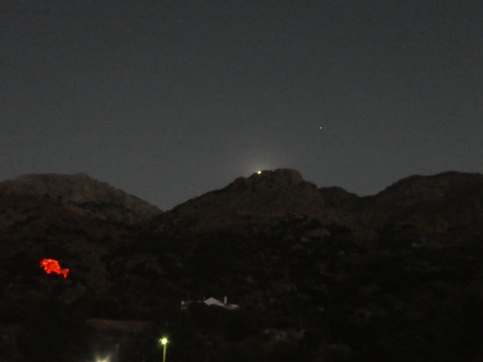 Who needs to go out for entertainment!!!

Throughout the summer, John and I have been reading to each other, a group of five books which are Greek novels about the past which have been simplified for people like us.  Most days, we are now reading the Η Φόνισσα (The Murderess) by Alexander Papadiamantis.

We have found reading them challenging at times but because they have been simplified, we have understood the basic plot and the themes of the book, without first sinking into a pool of unknown vocabulary and expressions.  These are the first books of Greek literature that are accessible to us and we are very grateful to Manolis Petasis for recommending and giving them to us.

John and I have also become addicts of ‘Judge John Deed’, a BBC series from early 2000. John picked up series 2 from the British shop and has obtained series 1,3,4 and 5 from Amazon. Both of us enjoy this immensely.

Finally, communication with family and friends  based in the UK and Crete has continued to be very important  to our general well-being.  We are lucky to be able to access the phone, Facebook, WhatsApp and Zoom. In particular, a conversation with a friend, Qaisra, comes to mind.  John and I first met her in Aberdeenshire in 1997, then later I met up with her in London and together, we climbed Scafell Pike, in the Lake District together. I have not been in touch with her for years but John and she started a Facebook group which included me and she and I arranged to speak on the phone. It was lovely to hear her voice and the phone call reminded me of how I just loved her values and her humour. We both agreed that what makes us both very happy is to chat to people, learning about them and their lives. That is what I liked most when I was a youth and community worker, as I met all kinds of interesting people. It was a very happy moment talking to Qaisra and getting an update on her life!